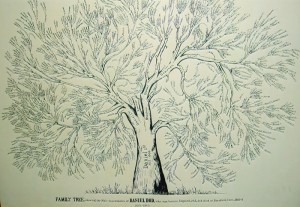 In researching the earliest residents of Glen Ridge, the task of gathering information on the man believed to be one of the first residents of the Borough, Abijah Dodd, logically fell to his great-great- great grandson, Howard S. Dodd, Jr., of Inness Place. In preparing the material on his ancestor, Dodd made copious use of one of his family treasures, the Dodd Genealogy, often used during the Bicentennial year in the compilation of historic facts on the community.

Abijah Dodd was born on November 9, 1757 at ‘Watsesson’, now Bloomfield, and died on August 21, 1837, also at Bloomfield. The 1940 Dodd Genealogy states, “His home was where Christ Episcopal Church, corner of Park and Bloomfield Avenues, now stands.” And an 1830 map of Bloomfield does indicate the Abijah Dodd house at that location. However, further study of deeds and some technical calculations by Howard Dodd indicate that in fact the house was located across the Turnpike next to the dam of the pond and not on the site of Christ Church. The discrepancy between this early map and a map of the 1870’s showing the Dodd house across the Turnpike is that the 1830 map was redrawn from memory in the early 1900’s.

Dodd was left about 25 acres of land upon the death of his father on August 19, 1804. While no positive proof exists, it can be assumed that Dodd lived on that 25 acres as early as the time of his marriage in 1780. What is known, however, is that Dodd’s father described that land in his will as the land on which his son Abijah lived. Studying the deeds on file in Newark and Trenton seems to indicate that Dodd owned most of the land south of the pond, (Toney’s Brook), and as far south as Appleton Road at Appleton Place, as well as between the Bloomfield line and a point two hundred feet west of Ridgewood Avenue. The two original deeds were copied and are now owned by Gladys Clegg of Montclair, a descendent of Durey Bromley, who was sold a portion of the land by Dodd.