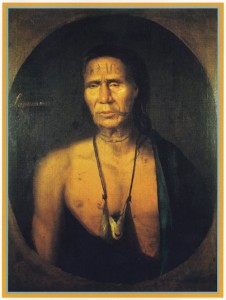 Before recorded history, the place today called Glen Ridge was known to the Indians. The Yantecaw, a sub-tribe of the Lenni-Lenape, encamped in the vicinity of Brookdale Park on the upper edge of our Borough, while two well-defined Indian trails crossed the area. Washington Street follows the old Nishuane Indian trail, Glen Ridge Avenue and that part of Bloomfield Avenue paralleling the Glen were used by tribes on their journey between the Passaic River and the territory to the west.

In 1666, 64 families from the towns of Branford, Milford, Guilford and New Haven in Connecticut purchased property from the Indians. The land was bounded by the Passaic River on the east, the foot of the mountain in what is now Montclair on the west, from the present-day line of Clifton on the north, to Elizabeth on the South. The deed dated July 11, 1667, on file in Trenton, was signed by Captain Robert Treat, the Reverend Abraham Pierson, and all 64 heads of family as well as nine Indians representing the tribe.

They laid out a town with a center that is now the intersection of Broad and Market Streets in Newark, dividing the land into six-acre parcels for each family, together with plots for church and burying ground; market place; mill lot; and training ground. Community wood lots and pastures were on the fringes of the town. Each family was also given a long narrow strip of land in the meadows, in the direction of today’s Newark Airport, where they could harvest the salt hay needed for bedding their cattle.

In May 1675, it was decided at a town meeting to open the outlying territory toward the mountain for settlement. This was based on choice of location, and would give settlers the property where sons growing up could begin on their own.

Five families are considered the founders of the Bloomfield-Glen Ridge area: The Wards, the Dodds, the Baldwins, the Davises, and the Morrises. In a matter of months after the May, 1675, town meeting, John Ward had procured a deed covering the land at the present intersection of Broad Street ad Bloomfield Avenue. In 1678, Daniel Dodd took up land on Franklin Street and by 1700, the Baldwins, the Morrises, and the Davises were all property owners here.

By the 1690s, there were also a few families settling in the northern section, now Brookdale. They were descendants of the Dutch who had spread out from the original Bergen settlements and and purchased land here from the Newark settlers. There was little contact between the Dutch and the English over the years because of the difference in language and background.

Possibly the first clearing was done o the Ward property in the late 1670s. By 1720, there were approximately 60 people, adults and children, living in the Bloomfield-Glen Ridge area. Town meetings which they were required to attend were all held in Newark, but there were two churches for Sunday worship, the original one in Newark and one formed in 1718 called the Mountain Society in what is now Orange. With the new church, most of the residents started traveling to The Mountain each Sunday.

The road they followed were the original Indian trails widened to accommodate ox carts, the only mode of transportation other than foot or horseback. For many years, the roads were too rough for wagons.

The Old Road to Newark followed Franklin Street. Broad Street, known as the Road to the Falls, started as Franklin Street and ran north. For the traveler going west, Park Avenue was the beginning of the Road to Cranetown, as Montclair was then called. Park Avenue, Bloomfield Avenue, Glen Ridge Avenue, Church Street in Montclair, north a short distance to Valley Road and west on Claremont Avenue would take the traveler to the gap in the mountains and over into the area known as Horseneck. The Road to Newton and to Second River is now Belleville Avenue, but for many years, it was opened no further west than the cemetery gates. Washington Street was the road settlers took to reach their church at the Mountain.

A map purportedly drawn in 1780 shows a thriving little community of 32 houses and shops along the one mail road, now Broad Street, with Jacob Ward’s Tavern serving as the gathering place for the area.

Tradition has it that George Washington passed through on a few occasions, stopping at the Joseph Davis house and the Moses Farrand house, both on Franklin Street, and the Thomas Cadmus house on Washington Street. While no actual Revolutionary War battles took place in this vicinity, many of the inhabitants supported great loss to property on more than one occasion from foraging by the British and Hessian soldiers. After the war, 21 families put in claims for damage.

In 1794, the first church in the immediate area was organized, the Presbyterian Church on the Green. Building on the present structure commenced in 1797, and services were hed in the Joseph Davis home on Franklin Street until its completion in 1799. The sandstone for construction came from both the quarries at Soho at the Bloomfield-Belleville line and also from the quarries along Bloomfield Avenue, now Central School’s playground.

In 1812, the Town ship of Bloomfield separated from Newark and incorporated. The area encompassed all the little settlements that today constitute Bloomfield, Belleville, Nutley, Montclair, Glen Ridge and parts of the Forest Hill and Woodside sections of Newark. As each area became more thickly settled, one after another broke away: Belleville with Nutley attached in 1839; Montclair in 1868; Nutley from Belleville in 1874; Glen Ridge in 1895; while the Forest Hill and Woodside sections after a few years as separate townships returned to Newark in 1871.

Improved transportation played a great part in the area’s growth: The Newark and Pompton Turnpike was chartered in 1806; the Morris Canal was completed in 1832; the Newark and Bloomfield Railroads was opened in 1856; and the horsecar railroad began in 1867.

The Newark and Pompton Turnpike is now Bloomfield Avenue. Two leading local citizens, John Dodd and Isreal Crane, were active directors in the laying out and building of the road. A toll road until 1870, it provided a more direct route to Newark than did the Od Road.

in 1830 a business directory for Bloomfield listed seven mills, several shops and artisans, three physicians, the pastor of the church, and “a goodly number f farmers.” A directory published ten years later listed four additional mils, one cotton factory, and one button factory.

With new means of transportation to reach the city, the suburban commuter came into existence. One hundred years ago, the commuter came home to a semi-rural town of gracious homes surrounded by spreading lawns and shady trees. However, many of the things taken for granted today were missing. There was no town water; each family had to depend on its own well. It was not until 1883 that the first water mains were laid, and even then they were not extended up to the section on the hill which is now Glen Ridge. There were no sewers; they were put in by 1893, but again only for the central portion of the town. Streets were thick with dust in the summer and deep in mud after each rain, and while money was appropriated for paving in the center of the town, none was appropriated for the residential streets on the hills. These were some factors that moved residents of the hill section of the Township of Bloomfield to seriously think of forming their own borough.