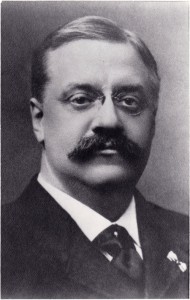 Since the creation of Glen Ridge in 1895, 24 of its citizens have taken their turn serving in the post of Mayor.  At the outset it was decided that elected officials in Glen Ridge would not be paid any salary or stipend.  Instead, trust was placed in a motivation of public service to attract citizens already successful in their chosen careers who would be willing to contribute the time necessary to holding office.

Serving as Mayor is particularly demanding and time-consuming.  How well has the policy worked of relying on the willingness of distinguished citizens to service their community?  One of the best ways to find out is to come to know something about the 24 men who have served as Mayor over the past 81 years.

Although it was not possible to find some of the vital statistics on several of the early Mayors, it does appear that Glen Ridge Mayors invariably have been successful professional men or businessmen, including several heads of major national corporations and a number whose biographies are listed in Who’s Who in America.  Interestingly, none of the Mayors whose birthplaces are known were born in Glen Ridge, although most of the recent Mayors came to the Borough with the families at a very early age (at the time of his death, Mayor George T. Minasian’s birthplace was erroneously reported as Glen Ridge in the newspapers).  One Mayor was born in England, three in Canada, and one in Chicago; the rest all came from northeastern states with the largest contingent from New York.

Glen Ridge’s first Mayor was born in New York City in 1857 and practiced law there, commuting from his home in the Borough. A leader in the independence movement, Rudd resigned as Mayor in 1902.  He died of typhoid only a short time later, October 22, `1903.

Born in Hunterdon County, NJ in 1847, Brewer was also a commuter to New York as vice president of the Western Union Company.  A Councilman from 1895 to 1902, he was appointed Mayor to fill out Rudd’s term, and then was elected to a full term. The president and founder of the Glen Ridge Trust Company (now Midlantic National Bank), Brewer died November 6, 1919.

The third Mayor of Glen Ridge was born in Sheffield, England, in 1852.  He lived in Brooklyn until 1888 and then moved to Glen Ridge.  A Councilman under Mayor Brewer, Lockwood continued the policy of Rudd and Brewer in developing new civic services for the community.  He died in 1938.
George C. White, January 1, 1908 – July 10, 1909

A councilman from 1903 until his election as Mayor, White served only 18 months before resigning.  During his term, the Borough population passed 3,000, and the town was divided into two voting districts.  White died September 5, 1939.

Born in Swanton, Vermont, in 1866, Mead was appointed to fill out the term of White, and then was elected to his own two-year term.  He was a founder and treasurer of the Union Carbide and Carbon Company.  During his term, the first building code was adopted and the Public Library was opened.  Mead died December 4, 1937.

The sixth Mayor of Glen Ridge had served early on the Council (1900-1904) before being drafted as Mayor eight years later.  During his term, the first fire ordinance was adopted, and Mountainside Hospital moved from Montclair to Glen Ridge.  Standish died January 30, 1926.

Glen Ridge’s wartime Mayor moved up from the Council where he had served from 1913 to 1916. Babbage was a manager and treasurer of various construction companies during this working career.  He died February 27, 1925.

Born in Elizabeth, NJ in 1882, Doe served on the Council at the same time as Davey, 1913 to 1919.  He was in the construction business, and then became a vice president and trust officer of the Glen Ridge Trust Company.  He died February 18, 1946.

Born in Fort Erie, Ontario, Canada, in 1874, Hurrell was a lawyer and became vice president and general counsel of Prudential Insurance Company.  A Councilman for seven years before his election as Mayor, Hurrell helped form the first Community Chest in Glen Ridge.  He laid the cornerstone for the present Municipal Building and conducted the first meeting held there.  The present garbage disposal and Wanaque water supply systems started under his tenure.  He died June 23, 1938.

Like Hurrell, Koch was listed in Who’s Who.  Born in West Hoboken, NJ, in 1880, he died November 4, 1961.  He was a Wall Street CPA.  During his term, the site for the U.S. Post Office in Glen Ridge was selected. During eight years as Councilman and four as Mayor, Koch was active in the acquisition of land for the north, central, and south playgrounds.

Born in Augusta, Maine, in 1889, Barrows was a noted patent attorney.  During his five years as a Councilman (1930-35), he led a special committee for planning and construction of the Municipal Building which was built in 1931.  Carteret Field was renamed Barrows Field in 1962 in his memory.  He died May 28th of that year.

Glen Ridge’s wartime Mayor was born in New Brunswick, Canada in 1883.  He served as Councilman for five years before becoming Mayor.  A lawyer, Elder was general counsel for the Interstate Commerce Commission before holding the same position for the Central Railroad of New Jersey. He was a founder of the New Jersey Taxpayers Association.  He died April 26, 1957.

Glen Ridge’s 14th Mayor was born in Brooklyn Heights, N.Y., in 1896, and moved to the Borough at the age of two.  A Councilman from 1938 to 1943, Minasian was a professional engineer, and late in his career served as Director of Community Relations for Consolidated Edison of New York.  He was a pioneer in air pollution research.  Minasian died January 12, 1972.

Born in Granville, New York, in 1901, Butler was president and chairman of Grand Union Stores, Inc.  Listed in Who’s Who, he has served on innumerable national and state boards and committees, and has received many honorary awards for outstanding public service.  He served on the Council from 1948 to 1953.

Glen Ridge’s 18th Mayor was born in Chicago in 1904.  He was a Councilman for two years before advancing to the post of Mayor. He is the owner and president of an advertising agency in New York City, Paul Klemtner, Inc.

Born in Brooklyn in 1905, Grant is a lawyer and a partner in the firm of Gasser and Hay.  He served on the Council from 1953 to 1959. Like many living ex-Mayors, Grant has remained highly active in Borough affairs, serving on special boards and committees.

Johnson was born in Jersey City in 1914 and came to Glen Ridge at the age of four.  He was a Councilman from 1960 until 1965 when he was elected Mayor.  He is a chemist and production executive with the firm of H. Kohnstamm and Co., food and drug color manufacturers.

Glen Ridge’s 21st Mayor was born in New York City in 1910.  He served on the Council from 1965 to 1969 when he was elected Mayor.  Frohboese was regional manager for the Ashland Chemical Company, a division of Ashland Oil.

Born in Brooklyn in 1926, Van Zoeren came to Glen Ridge at the age of three.  He was a star on the Glen Ridge High School basketball team.  His election as Mayor came after three years on the Council, 1969 to 1971.  He is assistant treasurer of the International Telephone and Telegraph Co.

Born in Schenectady, New York, in 1923, St. Clair moved to Glen Ridge at the age of 5.  He served two three-year terms on the Council before being elected Mayor in 1975, but was forced to resign on doctor’s orders.  St. Clair is advertising director of the American Electric Power Corporation of New York City.

In his sixth year as a Councilman, Bourne had been voted to the senior post of president of the Council by his peers, and was thus appointed as Mayor for the balance of 1976 upon St. Clair’s resignation.  Born in Brooklyn in 1929, Bourne came to Glen Ridge at the age of one.  He is a vice president and director of S. Eberstadt and Co., and investment firm.