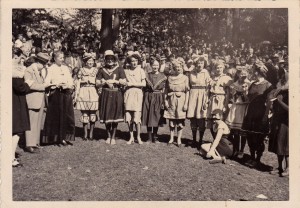 Throughout the early 1940’s, Glen Ridge residents responded to the tensions of World War II with a full scale civil defense effort. Police and Fire Auxiliaries were organized. Under the direction of the Civil Defense Unit, air raid wardens and public works crews were recruited, and a control center was set up in the basement of the Municipal Building. Homeowners were urged to set aside basement areas stocked with food and water in the event of a bombing.  At least one underground bomb shelter, built by a Ridgewood Avenue resident, is still in existence.   Blackout drills were held at regular intervals, and factory whistles and fire bells in the area were tested one day a week in the event they might be needed to sound air raid alarms.

In 1945, the Mayor and Council took an important step in setting up a Capital Improvements Fund.  Establishment of this fund has enabled the Borough to amortize replacement costs of needed equipment without resorting to bond issues.

The post war housing shortage resulted in the Borough purchasing, with state aid, temporary pre-fab housing units for War veterans.  These units were erected on Clark Street and Baldwin Street at Highland Avenue.  The empty Sherman Avenue School also was converted into temporary apartments for veterans.