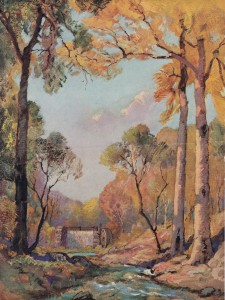 Many talented persons in the fields of art, literature, drama, dance and music have made their homes in Glen Ridge.  The community also abounds with people in the publishing, newspaper and radio-television fields.

Perhaps the best known Glen Ridge artist is F. Ballard Williams.  Internationally known for his landscapes, he received many awards both in the United States and abroad.  His work is displayed in major museums in this country.  Williams moved to Glen Ridge in 1885.  He was commissioned to paint the beautiful Glen painting which hangs in the Council chambers. Among other talented artists representing all types of art are:  Margaret Ely Webb, Alfred Jensen, Symon B. Cowles, Marya Duffy, Joseph Konopka, Jean B. Egan, Dorothy Cleary, Rosemarie Taylor and Evelyn Breeden.  The latter was commissioned by the Bicentennial Committee to paint the large mural-type painting, “Glen Ridge” which hangs in the Council chambers.

Glen Ridge is also the home of many musicians.  Perhaps the most well-known is Grace Gimbel, a concert pianist who has performed in major houses in the United States and Europe.

The Glen Ridge schools also are responsible for encouraging interest in art and music by placing strong emphasis on these cultural arts.  The art departments work closely with promising students and hold art shows for all age groups.  The music departments offer opportunities for young people to learn instruments and to play in ensembles, concert band or in the famous Glen Ridge Marching Band.  Choral groups are also available to train young singers.