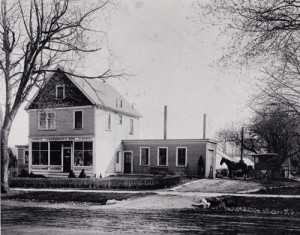 Aside from the mills, there have been other flourishing businesses in Glen Ridge throughout its history.

An 1890 map shows an “Ink Factory” on Midland Avenue where Carteret Street would eventually go through.  It is believed to have been one of Thomas Edison’s many enterprises, although the Edison National Historic Site has no information on it.  It is known, however, that on July 28, 1890, the Edison Lamp Company conveyed the property to the Edison General Electric Company.  It was known to oldtimers as the “torpedo factory” and is believed to have manufactured railroad flares at one time.  Former Borough Clerk James Brown, whose father was John Brown, the first Police Chief of Glen Ridge and a volunteer fireman, recalls his father’s tales of fighting a fire there which was especially spectacular because of the many highly flammable materials.  By 1906, a map indicates the site as “Ruins.”

The Nevins-Church Press, located at 92 Midland Avenue at Adams Place, was purchased by Matthew J. Nevins and Theodore Church in 1902 from the Aristotype Company, which had been established in 1895 or earlier.  The press manufactured folding cartons such as Gillette Razor Blade boxes and labels such as H. J. Heinz labels.  The entire tract of land was bought in 1954 by the Adams Midland Corporation for housing development.  The factory was razed on September 17, 1954, and the business moved to Route #3, Clifton, where it is presently a division of Union Camp Corporation.

Just north of the Nevins-Church Press within the same block was John Rassbach and Son, Florists.  Recorded as the first florist in Essex County, John Rassbach had come to the United States from Germany in 1853, working on a farm on Orange Road.  In 1862, he bought five acres of land on Midland Avenue for $1,000, where be built his home, and later built greenhouses along the Maolis Avenue side of his property.  The Rassbach’s business became so successful that they also opened a florist shop in Bloomfield Center.

At the back of the property at the southwest intersection of Ridgewood Avenue and Linden Avenue, Robert Johnstone developed his synthetic chicle in the early 1900’s.  The brand name was Mo-Jo and was a rubber by-product extended with chicle.  The two-story cement building had a water tower and was surrounded by a nine or ten-foot wall as a precaution against flammable materials used in the manufacturing process.  At Robert Johnstone’s death, the secret process was lost, and the buildings were torn down in 1934.

The Glen Ridge Quarry and Mining Company, probably formed in the mid-1880’s, occupied the area where Central School and playground are now.  Copper ore had been mined there, possibly as early as 1746.  Tools found in the old mine were given to the New Jersey Historical Society by Herman Cadmus, whose family owned the property for several generations.  Several hundred tons of low grade copper ore were mined by the Glen Ridge Quarry and Mining Company and shipped by the Morris Canal to the Oxford Copper Company in Jersey City where it was processed.  Samples of this ore are still owned by the Mitchell family, whose forebears were important members of the early community.

However, the product more readily associated with the quarry is the red sandstone found in a number of buildings in this area, such as the Wilde-Rudd house at 276 Ridgewood Avenue, the Midlantic Bank, Lackawanna Station, part of Christ Church, and the foundations of many Glen Ridge homes.