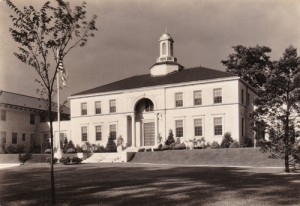 Glen Ridge was incorporated on February 13, 1895 after separating from Bloomfield Township.  From the time of its inception, the dedicated citizens serving on the governing body of the municipality have strived to provide complete and efficiently-run services to residents of the Borough.

The state statutes from which the Borough derives the authority for its local government give the municipality limited discretionary powers.  Many state laws are mandatory and others are discretionary requiring the passing of local ordinances to enforce them.

Glen Ridge is governed by the Mayor-Council form of municipal government.  Administrative duties are shared by the Mayor, who serves as chief executive officer, and the Council which formulates policy.  The senior councilman usually serves as president of the Council, and performs the duties of the Mayor in his absence.  All officials must be residents of the Borough and are elected at regular elections each year.  Nomination is by the Civic Conference Committee or by other petition.

The Mayor is elected for a four year term and the Council for three year terms on a rotating basis (two councilmen are elected each year).  Borough custom throughout the years has been that these officials serve for two terms only.  All serve without pay.  Council meetings are held twice a month throughout the year except for July and August when they are held once per month.

Committees There are six standing committees: Finance, Fire, Police, Public Works, Utilities and Public Buildings and Grounds.  Three councilmen serve on each committee.  Special committees are Recreation and Publicity.  These committees, as well as others such as the Community Service Committee, Building Code Board of Appeals, Glen Ridge Development Committee, and those which are set up for specific purposes or studies are composed of many citizens appointed by the Mayor with the advice and consent of the Council.  Members of the Zoning Board of Adjustment are also appointed by the Mayor and Council for five year terms.

Municipal Staff All employees except Library employees are appointed by the Mayor with the advice and consent of the Council.  There are 66 employees.  Department heads include:  Borough Clerk, Tax Collector-Treasurer (position is held by Clerk), Borough Engineer, Police Chief, Fire Chief, Tax Assessor, Director of Library,  Health Officer.  The Borough Attorney is appointed annually by the Mayor and Council and serves in a part time capacity as needed.

An interesting fact about the staff is that many of them not only have spent their entire working lives as Borough employees, but there are 22 families “in service to Glen Ridge” in which two or more family members have worked a Borough employees.  The police and fire departments have seen a long succession of fathers, sons, brothers and even grandsons following one another into service.   Other members of the families, both male and female, have seen service in other departments.  The Borough Clerk’s office has an interesting history with James Brown, following his father, John Brown, longtime Clerk, into office.  To continue the pattern, in November 1976, Stephen C. Berry, present Borough Clerk, will be joined in the department by his son, Stephen C. Berry, Jr., presently Violations and Court Clerk.

The caliber of the many men and women who have served the Borough as elected officials, paid staff, appointed committee members and volunteers as well as their dedication to the community is greatly responsible for the fact that Glen Ridge has remained a stable and beautiful residential community over the years.