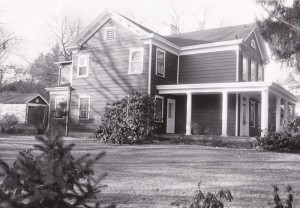 ANSON McCLOUD HOUSE – Built in 1856 by Anson McCloud, this house located at 190 Bay Avenue was erected on one acre of land purchased for $167. It is cited on the 1859 H.F. Walling Map of Essex County. An old family tombstone is incorporated into the present backyard patio. The house is currently owned by Mr. and Mrs. Paul G. Bursiek¹.

DOREMUS-WAKEMAN HOUSE – Located at 15-17 Sherman Avenue, this may be the oldest house still standing in Glen Ridge. It was possibly built as early as 1782, as noted in a logbook that has been misplaced. It was owned by Gorline Doremus in the mid-1800s when it stood just east of Freemen Parkway on the south side of Bloomfield Avenue. In 1867, Richard Wakeman purchased the house. The house was the scene of a brutal matricide in 1905, when grandson Richard Wakeman hatcheted his mother. The house was moved to its present site in 1908 and is currently owned by Alice J. Hines¹.

PHINEAS J. WARD HOUSE – Phineas Ward inherited 45 acres of land in 1835 at the time of his father’s death. Since Ward was only twelve years of age at that time and did not actually gain title to the land until 1851, it is believed that the house located at 298 Washington Street existed by then as a small three-story farm house that faced west. The house is cited on the 1856 Thomas Hughes Map of the Town of Bloomfield. The towers and north portions of the house were probably added by Ward between 1875 and 1885. The house is currently owned by Mrs. Anthony Bambara¹.

JOHN RASSBACH HOUSE – John Rassbach, a German emigrant, bought five acres of land on Cadmus Street (now Midland Avenue) in 1862 for $1,000 where he built his house. At some time prior to 1890, his house was moved to its present location at 318 Maolis Avenue. The house is now owned by Mr. and Mrs. A. Celic¹.

JAMES ROBLEY HOUSE – Located at 100 Glen Ridge Avenue, this house was probably built between 1854 and 1859 by James Robley. It is cited on the 1850 H.F. Walling Map of Essex County. The house is presently owned² by the J. Prestifilippo family¹. Another house, built by Robley between 1865 and 1875 and located at 92 Glen Ridge Avenue, was occupied by his daughter and granddaughters.

BRADBURY-LANGSTROTH HOUSE – This house is located at 289 Washington Street. In 1856, 2.73 acres of land were purchased from the Cadmus family by William Bradbury for $1,100. The price is an indication that a house was probably also included in the purchase. Bradbury, a composer of hymns, had a piano factory in New York City and was also the proud owner of Felix Mendelssohn’s favorite grand piano. Thomas Winsor Langstroth bought the house from Bradbury in 1860. Later, he built a house for his son behind his own home, thus opening Winsor Place, which was named for the family. The house is presently owned by Mr. and Mrs. John L. Sullivan¹.

BROWER-DODD HOUSE – Built by Samuel Brower during 1829-30 on the site of the present Middle School³, this house is an early example of Gothic Revival architecture. It was occupied by the Brower family until 1870, when Thomas C. Dodd purchased the property. The house was moved to its present site at 28 High Street in 1895, in anticipation of the construction of Glen Ridge’s first school. The house remained in the Dodd family until 1957, when it was purchased by its present owner, Mrs. Louis Shaw¹.

JOHN DOUGHERTY HOUSE – Probably built in 1856 on 4.11 acres of land that John Dougherty purchased for $210, the house is located at 25 Lincoln Street. It was a typical farm house of that period with the original front door where probably the left window is now. At one time, the present entrance hall may have been a kitchen wing. Also, several additions have been made to the rear of the structure. The house is presently owned by Mr. and Mrs. K.G. Kimberland¹.