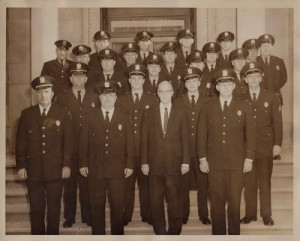 Shortly after the founding of the Borough in 1895, the police department was formed with a total staff of three policemen.  The three marshalls were soon reduced by one as Marshall Thomas Cullen was dismissed from the department a little over one month after his appointment.  According to the records, Officer Cullen patrolled the Borough one day in a state of “exuberance” which led him to make indiscriminate arrests of citizens.  The influx of startled “prisoners” led to his immediate discharge although he claimed he was the victim of “knockout drops” administered by a mysterious individual.

In 1910, two police dogs from Belgium were purchased to aid in night patrols, an unusual innovation at that time.  A report issued after six months noted that crimes of robbery and housebreaking had decreased by 75 per cent since the arrival of the dogs.

By 1912, the police department had increased to a total of seven men.  With the purchase of a motorcycle in 1913, Glen Ridge started to acquire its reputation as “a place in which it was dangerous to indulge in unlimited speeding.”  Cars of that time would be speeding at a rate of eight or ten miles per hour.  The recipient of a $7.50 fine and a lecture on speeding was Dr. Henry Powers of Montclair, then president of the Automobile Club of New Jersey.

The first Borough jail was in the basement of the D. L. & W. Railroad station.  In 1896, the department moved to the new Fire Department building, and in 1931, the final move was made to the present headquarters adjoining the Municipal Building.

As the Borough grew, so did the Police Department.  In 1976, the department numbers 26 men including the police chief and other officers.  In 1973, Paula Mansfield, the first female and civilian worker was hired.  She joined the department as records clerk to relieve the policemen of paperwork and to act as police matron.  There are three marked and two unmarked police cars which are on patrol 24 hours a day.

The department’s largest number of arrests is for speeding.  Burglary, vandalism, mugging and narcotics are also problems with which the department must cope.

Equipment and training of today is a far cry from that of 1895.  Modern photo laboratory, sophisticated communications systems, jail, classroom, complete arsenal and firing range are located at headquarters.  Police officers attend training sessions in all type of modern police methods.  A tactical squad has been fully trained in recent years to be able to respond to any emergency situation.

Over the years, the police department has also carried on an extensive community relations program which has included: bicycle inspection, safety and identification programs, operation theft guard and Cops and Kids program. The latter is aimed at acquainting young people in the Borough with the police department and its functions.  The Patrolmen’s Benevolent Association has sponsored an annual scholarship for which it runs several fund-raising events during the year.

No record of the department would be complete without noting the work of the Municipal Court.  Although not operating as a part of the department, violators appear before the magistrate on Tuesday evenings throughout the year.  Traffic and parking violations are the most prevalent and the Borough’s share of fines and court costs produce thousands of dollars each year.

The department has always been alert to the security needs of the community responding rapidly to all types of emergencies.  Because of the excellent reputation of the Glen Ridge police, the crime rate in the Borough has been comparatively low.