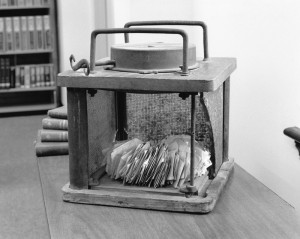 The manner in which a community is created does much to condition its future style and government. This was certainly true in the case of Glen Ridge.

By the early 1890s, it was apparent to men such as A.G. Darwin, Edward S. Wilde and Robert Peele, who were leaders in laying out the Glen Ridge section of Bloomfield, that the “Hill” section was not going to receive its fair share of tax monies. They, as well as other men of high standards and civic pride, felt that a fair portion of the $30,000 annual tax paid to Bloomfield should be returned to the section in the form of more street lamps, paved roads (of the 13.3 miles of streets, only 3.2 were paved) and other much needed improvements. Their civic pride challenged, these men tried in every way to remedy the unfair treatment.

SECESSION – It must be understood that Glen Ridge was the product of a rebellion, a bloodless one to be sure, but nevertheless a somewhat conspiratorial and deliberate act of secession. Perceiving that nothing would be done by the town of Bloomfield to alleviate their grievances, leading citizens of Glen Ridge decided to take action.

Their first effort was to work through the Bloomfield system by placing Robert S. Rudd on the township Committee. They then attempted to make Rudd chairman to ensure a voice for the Glen Ridge district. When this move failed, the citizens felt they were faced with the classic taxation without fair representation or return for their money. The stage was set and the independence movement began in earnest.

Not all who dwelt in the “Hill” section favored separation from Bloomfield. Noted citizens such as Arthur J. Lockwood (who later served as Mayor), J. Banks Reford, John Oakes, Frank D. Ward and Edward Rayner favored dividing Bloomfield into five parts with a greater degree of autonomy for each part. They argued that Glen Ridge, as one of those parts, would continue to enjoy the advantage of a central fire department, police force and school system.

Those favoring independence wished to control their own destiny and reestablish their rights as citizens. The independence group which initiated the “revolution” in the latter part of 1894 had recourse to a legislative act. The Borough Act of 1878 stated that the inhabitants of a township not larger than four square miles and with a population not exceeding 5,000 could incorporate through a special election. The decision to become a separate community would be determined by a majority of votes cast by those qualified to vote in state and township elections.

Robert S. Rudd personally retained Judge Joseph Coult of Newark to prepare a brief on the situation which called for a vote on February 12, 1895. The case was sustained by a judge of the Court of Commons who issued the election order.

At the election, held in the building behind the Men’s Club opposite the D.L.& W. station, 315 votes were cast. Eight votes were invalidated by improper marking; 165 stood in favor of incorporation and 142 were opposed to separation from Bloomfield.

Though the majority of voters had approved the secession, Bloomfield immediately contested the action in the courts. The fiftieth anniversary edition of The Glen Ridge Paper (May 25, 1945) tells the story: “…On February 13, in the early morning, Mr. Rudd and Alex S. Niven sought out the Borough’s lawyer, Joseph Coult. Unable to find him at his house, they followed him to his club where they turned the returns over to him. Mr. Coult proceeded at once to the office of the County Clerk, James T. Wrightson, and filed the returns with him by 9 o’clock in the morning.”

At the same time that Judge Coult was filing the returns in the County Clerk’s office, Thomas N. McCarter, representing Bloomfield was appearing before Justice Depue at his home, to have the writ of certiorari signed, questioning the validity of the election. McCarter and his associates, then, armed with that document, hastened to Clerk Wrightson, only to be told that the election returns had been filed an hour before and incorporation had taken place under the law with that filing.

Unsuccessful in their first attempt to block the incorporation, the Bloomfield lawyers proceeded with their case. They contended that the filing was improper, that the polls had not been opened at 6 a.m. as law required, that one election official had not been at his post on time on February 12, that notices were not posted at the most public spots and that other minor discrepancies had taken place in the election which invalidated it.

The case, on writ of certiorari, went to the State Supreme Court which dismissed the case. However, McCarter and William S. Dodd, who represented Bloomfield, took the case to the Court of Errors and Appeals. That court of final jurisdiction affirmed the decision of the lower court and, on June 20, 1895, an Order of Affirmance was filed dismissing the case completely.

Litigation continued until about 1910, but throughout those years, the leaders of the new community calmly went ahead with the planning and implementation of the needs of the Borough.

It is clear that the independence movement might not have occurred had it not been for a certain group of men, the Borough’s Founding Fathers. These men were not unlike many of our nation’s founders. They were men of substance, financially comfortable, distinguished in their careers, ready to serve the public interest as they perceived it and to take any risk entailed. Some of the men in the forefront of secession movement included:

The Gallagher holdings figured prominently in the naming of the community. When the Newark and Bloomfield Railroad was completed in the middle of the nineteenth century, from Roseville to West Bloomfield (now Montclair), the only stop in the “Hill” section was at Moffett’s Mill. In 1860, the railroad built a passenger platform at Prospect Street naming the station Ridgewood from the adjoining Gallagher estate. The name lasted for twenty years although often confused with Ridgewood on the Erie Railroad in Bergen County. When the first Post Office opened on April 2, 1883, the postal authorities insisted on another name and, by choice of the citizens, Glen Ridge was adopted.

A broadside issued by a citizen’s committee requested that “The friends and supporters of the Borough, who are legal voters within the limits of the Borough, are invited to attend a public meeting to be held in Glen Ridge Hall, Friday evening, April 5th, 1895, at 8 o’clock, to nominate the officers to be elected, and to fix the amount of money to be raised ‘for general Borough expenses’ at the Borough Election to be held April 9th, 1895.”

Rudd, who was elected Mayor and Brewer, the president of the Council, were very unalike, the first being forceful, somewhat impetuous and not a little stubborn. In contrast, Brewer appears to have been a calm, deliberate and kindly man. Both, however, were imbued with those characteristics which singled out the leaders of the secession movement and they worked together toward the best interests of the new community.

INDEPENDENCE – The early Glen Ridge leaders proceeded to work toward their vision with all deliberate speed. The first several decades of the Borough were a remarkable period of expansionism and provision of the long-desired public services…improved roads, curbs and sidewalks, street lighting, and educational system, police and fire protection and highly responsible residential development.

Characteristic of the vision and of the establishment of a tradition of public service which has remained strong in Glen Ridge was the Glen Ridge Park Association. This was a private association formed for the sole purpose of gradually acquiring from private hands the various lots that made up the Glen. The group put its funds into something resembling a “land bank” pending takeover by the municipality, which occurred with the passing of a 1901 bond issue of $35,000. Much of the land was contributed for very nominal sums. The acquisitions were continued in the early days by the Borough Council in farsighted management of the conversion of Glen Ridge from a factory town to a residential community.

In his independent study of Glen Ridge in 1909, noted landscape architect, John Nolen, summed up these early achievements as follows: “To the natural loveliness of its situation, Glen Ridge has added much by an enlightened public policy and a united civic spirit that are seldom found in such a highly developed form in so small a place. Foresight, generous public expenditure and wisdom have given to the present generation and insured to the future certain public advantages of very great value. In the first place, the most characteristic and most beautiful natural feature of the Borough…The Glen…has been nearly all secured for a public park. This is a valuable asset, one that could not be duplicated. Yet its character and situation are such that, in private hands, it probably would have become an eyesore. The people of Glen Ridge cannot be too highly commended for making this acquisition in time.”

Something of the thinking of the Glen Ridge founders may be seen in an excerpt from the introduction which a group of them wrote to the Nolen Report: “We should realize that, although Glen Ridge is not a large place, our position is similar to that occupied a generation ago by communities now grown large, and that by taking thought we may still avoid many of the difficulties and much of the expense that larger places must now meet. The time has come when we should understand that skill and foresight should control what is so frequently left to chance; that there is a real art in the making of a town; and that it behooves this generation to master and practice it.”

As stated anonymously by one of its citizens in 1924, “Glen Ridge, at the present period of its history as an independent municipality, represents a successful illustration of the development of ideal community interest, resulting in a major degree of unison of purpose and action on the part of the people composing it, actuated by commendable ideals of civic pride and liberal public sentiment.”