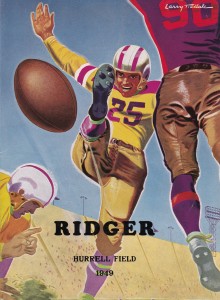 Over the years, Borough residents, both young and old seem to have been strongly oriented to sports.  Historical records show a women’s golf team in 1905 and the famous Men’s Club sported its own bowling alley.  Skiing and skating at the Country Club were popular pastimes.  Tennis, a favored sport of the early days has become increasingly popular in recent years.  Paddle tennis courts erected at the corner of Belleville and Sherman Avenues in the early 1970’s are constantly in use.

High school athletics – baseball, football, basketball, track, field hockey, gymnastics, tennis and, recently, golf, cross country, and wrestling have always been an integral part of Borough life.  The small community has a proud reputation of winning teams topped by the long winning streak of the football team in the late 1960’s and early 1970’s.

A number of outstanding athletes have been Glen Ridge residents.  Some have achieved fame in high school, some in college and some in amateur athletics.  Worthy of special mention are two, each outstanding in his field.

Horace Ashenfelter was winner of the gold medal in the 3,000 meter steeplechase at the Olympic Games in 1952 at Helsinki, Finland.  A graduate of Penn State College, the 29 year old F.B.I. agent had won numerous awards in two and three mile events before he decided to try for the steeplechase.  Ashenfelter’s defeat of the Russian, Kasantsev, in the time of 8:45.4 seconds broke the Olympic record by 18.4 seconds and was the first time in 44 years an American had won a long distance race.  Ashenfelter’s four sons, following in the family tradition, have all been outstanding athletes.

Gary Cuozzo, quarterback of the 1958 Glen Ridge High School team which won the New Jersey Conference title, was also named All State in both football and basketball that year.  An honor student, he went on to become Co-Captain of the University of Virginia football team winning nomination to numerous honorary teams.  Graduating with honors, including Phi Beta Kappa, he joined the Baltimore Colts of the National Football League in 1965 serving under Johnny Unitas.

Cuozzo joined the Minnesota Vikings as quarterback in 1970.  During his football career, he continued his education in off-season months receiving his dental degree and his orthodontia degree.  An outstanding scholar-athlete, he was the recipient of the National Football Foundation’s scholar-athlete award and has been an example for aspiring young athletes.