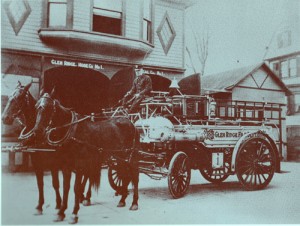 The Glen Ridge Fire Department was founded on May 14, 1895 and was made up of 13 volunteer firemen. While the Department was preparing itself to serve the Borough, the town of Bloomfield continued to render fire protection to Glen Ridge.

The first equipment purchase was made in 1895 when the Borough authorized the acquisition of a hand-drawn two wheel Hose Cart.  Two years later, a hand-drawn Hook and Ladder truck was acquired.  Glen Ridge Hose Company No. 1., and Glen Ridge Hook and Ladder Company No. 1 were organized, and Fire Department headquarters was established in an old barn on the west side of Herman Street in the spring of 1896.

In April, 1897, a bell tower was erected in the rear of Fire Department headquarters.  The bell was inscribed:  M.E. Neely Bell Co., Troy, N.Y., U.S.A., 1898, and it is likely that the bell was put into service shortly after it was cast.  It was in active service for over 40 years ringing out messages of alarm, sorrow and cheer. In addition to fire alarm signals, the bell rang God-speed and welcome home to the soldiers of the Spanish-American War and of World War II.

A horse-drawn Fire Wagon was purchased in April, 1897, and in 1905 the Hook and Ladder Truck was fitted with shafts so that it could be drawn by a horse.  On June 29, 1911, arrangements were made for the exchange of the horse-drawn Chemical Wagon for a good make of automobile with chemical tank, hose and ladders.  It was known as the Kanawha Chemical Motor-driven 40-Horsepower Fire Apparatus and was delivered on June 10, 1912.  Over the years since then, newer motorized equipment has been purchased as needed.

In 1896, the Borough acquired its first fire house.  The building was on Herman Street with a vacant lot to the right. It had a bay window with a steeple in front and a bell tower in the rear.  The first floor fire headquarters had an open space for equipment, an office and a bedroom in the rear.  Steps on the right led to Police headquarters, which had a desk in front, courtroom behind and two cells in the back. Also in the rear was a room containing batteries to operate the bell.

To improve fire service in the Borough, the two-ton brass bell was replaced by a modern whistle, operated by electricity.  The bell tower was dismantled in a ceremony on December 7, 1942, the first anniversary of Pearl Harbor, at which the bell rang out for the last time.  The bell sat next to fire headquarters for some time before a decision was made as to its disposition.  B.I. Davidson, a former councilman, suggested that the bell be donated to the scrap drive, and Mayor Alexander H. Elder endorsed the idea because a dire need for metal existed during the War.

Today, fire headquarters is on the other side of Herman Street from the original location. Two paid firemen are on duty at all times and an extra driver comes in on all alarm calls.  It is the base center for a modern alarm system and radio communication center, and houses two Mack Pumpers, the oldest being only twelve years old, an aerial truck and an ambulance.

In May, 1950, Glen Ridge residents decided to raise money for an ambulance as a functional memorial to those who gave their lives in World War II.  The fund drive conducted by the Fire Department, was enthusiastically oversubscribed, and the ambulance was delivered in October.

The first Glen Ridge Ambulance Squad came into being in November, 1950.  The original squad of fifteen members was trained in first aid and ambulance techniques.  Today, all men joining the Fire Department become members of the ambulance squad.

Known as a well-run and capably-staffed organization, the Glen Ridge Fire Department has the honor of being the first volunteer-paid department in the state to hold a ‘B’ Fire Insurance rating, which is the top rating available to be achieved by this type of department.