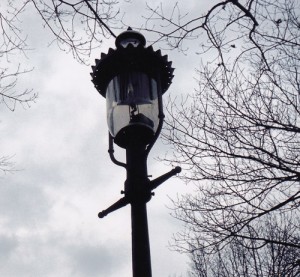 The quiet glow of gaslights along the Borough’s streets has become the “trade-mark” for this suburban community. While other towns and cities can boast a greater number of gaslights than the number in Glen Ridge, it is unlikely that any other community is lit almost in its entirety by gaslights. With the exception of a few county owned streets in the Borough, all Glen Ridge streets are lighted in this manner, lighting often sought after by other communities, and becoming more and more rare today because of the shortage of natural gas.

In 1895, when Glen Ridge seceded from Bloomfield, architects suggested the stylish gas lamp for the small community. By 1914, the Borough had erected 370 gas lamps; in 1930, some 30 lamps were ordered toward the current 666 lamps.

During World War II, when natural gas was both expensive and scarce, only a few communities retained the gas lamps they had. Many lamps ended up in junk yards, and a number of salvaged and repaired lamps were brought to Glen Ridge. The City of New York, especially, replaced many gas lamps during the War, and a number of their discarded ones found their way to this Borough. This “scavenger” effort as well as the difference in purchase dates for the lamps explains the existence in the community of 12 different types of lamps with different mantles.

Local residents who spent those War years in Glen Ridge recall that during blackout tests, the air-raid warden for each block had to pull the wire on each individual lamp to dim it and then restart each lamp in his section when the alert was over.

The light given off by the gas lamps is equivalent to that of a 50 watt bulb and is effective only in the immediate area. Most of the lights in the Borough have Welsbach burners, named for the Austrian chemist Baron Von Auer Welsbach, who introduced the incandescent mantle to American streets in the 1890’s. When gas lights were first installed in the Borough, they had an open flame and burned what was called “carbureted hydrogen gas.”

The gaslights are equipped with timers that turn the main gas jet on at night and off in the morning, and are responsive to light and darkness. In early days before the timers were installed, a lamplighter would have to turn each light up at dusk and down in the morning. The gas flows through a small copper tube, buried below the frost line, to keep it from damage.

The ladder-carrying Anthony Andriocco, employed by the Welsbach Company was a familiar sight in the Borough where he serviced the lamps and set the timers for over 30 years. Andriocco retired last year and was replaced by Larry Comasco and Robert Duchek. The Welsbach Company which once serviced close to 300,000 gaslights, still cares for the almost 3,000 that are in operation in the U.S. today. The company turned to production of electric street and traffic lights and into other related areas as it reluctantly sent almost 250,000 gaslights to the scrap heap in the past 50 years.

Recent negotiations with the Public Utilities Commission regarding the retention of Glen Ridge’s gaslights have left the issue unresolved in this Bicentennial year. However, strong arguments have been made by the Borough Attorney that replacement of the community’s entire lighting system would cause undue financial hardship in a time when many communities are suffering financial instability because of a national recession. Conclusions may not be soon in coming, but the consensus among the Borough residents seems to be that the gaslights provide a charm and warmth in their community that they are not eager to forfeit.