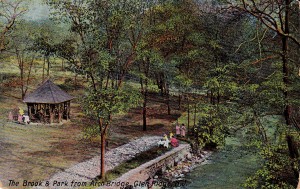 Situated on elevated land between Montclair and Bloomfield, Glen Ridge enjoys several topographical advantages.  Deriving its name from the ridge and from the wooded glen through which Toney’s Brook flows, the community benefits from cooling breezes and a lovely park-like setting in the center of the town.

In the early 1800’s, Toney’s Brook was the source of power for a number of mills along its banks. By the late 1890’s, one by one, the mills ceased operations.

In 1899, a group of citizens formed the Glen Ridge Park Association for the express purpose of purchasing land along the glen to be preserved for a park.  Appealing to the residents of the community to aid in keeping the ”pretty brook with grassy banks and well-wooded slopes” in its natural state, the Association directors completed a successful money-raising campaign. The abandoned Moffett Mill site was purchased and, by mortgaging this plot, other pieces of land were acquired.

The Borough voted a bond issue of $35,000 in 1901.  The money was used to refund to Association stockholders the money they had advanced, to take over the acquired land and to establish a fund for further property acquisitions.  Eventually all tracts were acquired.  Some were given as gifts such as the land donated by R. B. Davis for the sum of one dollar and the tract given by the Lackwanna Railroad. Others were purchased from the landowners at a very nominal cost.

The Glen has been maintained as a park, but pollution from upstream and the necessity to construct barrier walls to prevent erosion along its banks has caused it to lose some of its esthetic beauty.  Even so, the numerous trees and shrubs along its banks provide a refreshing and lovely oasis as one drives along Bloomfield Avenue.