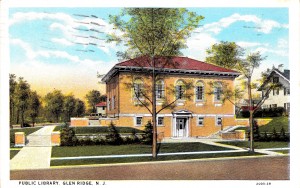 The Glen Ridge Library grew, appropriately, out of a genuine love of books generating from a small group of thirteen women who met in 1890 to form a reading club, known from its first meeting as the “Clio”.  Miss Henrietta Northall, in whose home the group met, and Miss Abbie Fuller were its leaders.  From the beginning, their aim was the formation of a town library.  However, during the first two years of the work toward their goal, the library was a private collection put together by the club members and housed in a room provided in Miss Northall’s home, the old Gallagher family homestead on Clark Street.

The year 1912 was one of the most significant in the history of the institution, for it was in this year that the library was presented to the Borough and officially incorporated as a Free Public Library.  In this year too expansion forced a move to the second floor of the Hall, which provided more space for increased activity.  Margaret Brower became the first paid librarian and assumed the direction of the library, which had been done on a volunteer basis by Henrietta Northall and Abbie Fuller until that date.  The library functioned in this setting until a gift of a new building by Henry Chapman and a purchase of the land for it by the Borough resulted in the construction of the present library building.  Its doors were opened to the public in May, 1918.

The growth of the Glen Ridge Library since that date has been a physical one in part.  Although no additions have been necessary since the building was completed, the collection has grown from 104 volumes in the days of “Clio” to 6000 in 1910, and to approximately 43,000 in 1976.  Both the Adult and Children’s libraries originally occupied the upper level of the building leaving the lower level, today’s Children’s Room, for use as an auditorium.  Today all levels are filled with books and equipment, rearranged from time to time to provide meeting space for local groups and to make possible the many programs for children and adults now held.

More than the increased volume of the library, its history tells of a growth of services expanding far beyond the book collection.  Henry Chapman, a Trustee for many years and President of the Board prior to his death in 1926, not only gave the building, but bequeathed a trust fund known now as the Chapman Fund.  It was left to provide for books and staff compensation so that the Glen Ridge Library might be above the ordinary and not have to depend solely on municipal tax dollars.  Another Board President, Charles E. Griffith, in like fashion willed money known as the Charles E. and Susan Hoyt Griffith Fund to be used by the Board of Trustees for the benefits of the library collection and staff.

The interest and generosity of the Borough’s residents is also an unceasing source for the library’s growth and expansion of services. Gifts of books as well as funds to provide equipment have been given by individuals and by Borough organizations and continue to be given.  It is felt that this extra element of support gives the possibility for services and facilities far greater than those normally provided for a town with as small population as that of Glen Ridge.

The library today is first a reservoir of books for recreational reading and research. However, it also serves as an information center, a meeting place, a source of entertainment through films, programs and story hours.  It fulfills beyond the wildest dreams the determination of that small group in “Clio” at their candle-lit first meeting on a wintery day in 1890.  Now, in 1976, much of that same sprit carries it on in its purpose, to enlighten the community it serves.