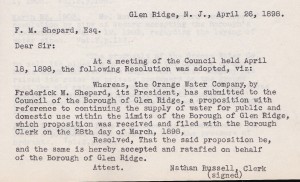 Prior to about 1882, residents of the Glen Ridge section of Bloomfield obtained their water from wells, flowering springs and catchment devices for the collection and storage of rain water running from the roofs of buildings.

In March, 1912, after a study by Morris R. Sherrerd, an eminent consulting engineer, the Borough decided to recommend the purchase of the water distributing system of the Orange Water Company situated within the Glen Ridge boundaries. A bond issue of $43,669.52 was presented to the residents for approval.  In presenting the proposition for acquisition of the water system, the Mayor and Council cited the following reasons why it was advisable for the Borough to own the water plant:  to afford better fire protection; substantial profits to the Borough; possibility of participation in a water supply through the State Water Supply Commission and reduction in price of water to residents.  Voter approval was obtained, the bond issue floated, and the water system purchased in May, 1912.  The first full year of operation resulted in a reduction of $3,000 in annual costs.

After a few years of obtaining water from Newark’s Pequannock watershed, the Borough contracted with the North Jersey District Water Commission to obtain water from the Wanaque system.  Glen Ridge contracts with Montclair to have its water delivered at suitable pressure through the Montclair pumping stations.

In the severe drought period of the early to mid-1960’s, the water supply in northern New Jersey was extremely depleted.  Glen Ridge residents responded to Mayor Chauncey Grant’s emergency proclamation by drastically curtailing their use of water.  Sprinkling of lawns and gardens and filling of swimming pools was prohibited.  Citizens were encouraged to double up for baths and showers, to reuse water in any way possible and to carefully check for leaks of any kind.

The five year drought resulted in a number of private wells drilled in the community.  Well-owners who watered their lawns were forced to erect signs on their property stating that the water was from their own wells because of irate calls to police from both residents and others passing through town.

Over the years, the Borough water system has moved from old wooden mains and above-ground pipes to a modern system which is constantly under survey for renovation or replacement.